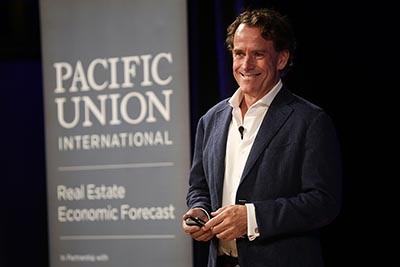 Pacific Union is honored and humbled to announce that CEO Mark A. McLaughlin has been named one of the most-admired company leaders in the Bay Area, the result of an exceptional focus on recruiting and retaining the region’s best and brightest real estate professionals and corporate staff.

The San Francisco Business Times has named McLaughlin one of the region’s most-admired CEOs based on his extraordinary leadership, vision, and values. The reception was held on Wednesday, Nov. 15 at the Saint Regis San Francisco, where McLaughlin was recognized alongside 11 other top Bay Area chief executives.

McLaughlin acquired Pacific Union in 2009 and has since grown sales volume to a projected $18 billion in 2017, which would make the brokerage the seventh largest in the United States. It is McLaughlin’s commitment to people that has fueled the brokerage’s outstanding growth.

“I’m not really in the real estate business — I’m in the people business,” McLaughlin says. “If I don’t get that right, the rest doesn’t matter, and without those people, I would not have received this honor.”

Along with his focus on people, McLaughlin has grown Pacific Union by expanding the brokerage’s West Coast footprint, beginning with a merger with Beverly Hills-based John Aaroe Group in December 2016. He then further strengthened Pacific Union’s California presence by merging with Beverly Hills-based Partners Trust in August 2017. Last month, Pacific Union bolstered its East Bay footprint by acquiring Danville-based Empire Realty Associates. The brokerage now has 47 offices and more than 1,450 of California’s top-performing real estate professionals.

McLaughlin has been previously honored by top real estate industry publications for his industry innovations. In January of this year, he was named to Inman’s The Real Estate Influencers of 2017 list, which recognizes executives who are transforming the industry. Previously, McLaughlin received RISMedia’s Real Estate Leadership Award and has been named to Swanepoel’s Power 200 list.