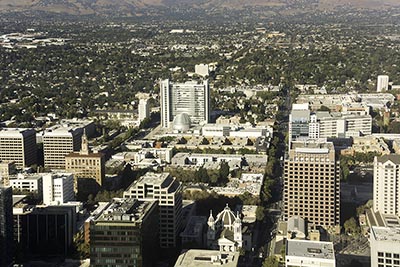 Nationwide, annual home price growth was the slowest in more than two years in the third quarter, but the Bay Area’s two largest housing markets countered that trend, with appreciation higher than it was at the same time last year.

ATTOM Data Solutions’ latest quarterly report puts the median sales price for U.S. single-family homes and condominiums at $256,000 as of the third quarter, up 4.8 percent year over year for the slowest rate of annual appreciation since the second quarter of 2016. In a statement accompanying the report, company Senior Vice President Daren Blomquist attributed cooling price growth to declining affordability, which has been exacerbated by rising mortgage rates.

Nearly half of the 150 U.S. metropolitan areas that ATTOM Data Solutions tracks saw annual price growth decelerate in the third quarter when compared with the same period last year, a list that includes Los Angeles, Santa Rosa, and Vallejo. Los Angeles’ $640,000 median price was up by 5.8 percent from the third quarter of 2017, down from the 8.2 percent growth observed in the previous year. Santa Rosa saw only a slight cooling, with the $629,000 median price up by 9.4 percent compared with the 9.5 percent annual gains recorded in the third quarter of last year. In Vallejo, home prices rose by 7.6 percent to $425,000 after increasing by 11.0 percent last year.

San Jose and San Francisco were among the 51 percent of markets where annual home price increases accelerated when compared with the third quarter of last year. San Jose‘s $1,130,000 median sales price was up by 16.9 percent from the third quarter of 2017 after registering 13.7 percent appreciation the previous year. In San Francisco, prices rose by 11.6 percent to $865,000 after growing by 8.4 percent during the same period last year.

Home prices in San Jose are now 57 percent above their prerecession high. Prices in San Francisco have surpassed their precrisis peaks by more than 20 percent, while Los Angeles and Santa Rosa are up by more than 10 percent from previous highs. Vallejo home prices are still about 6 percent below their prior peak.

Nationwide, home sellers netted returns of 32.3 percent since the time of purchase, up slightly on both a quarterly and yearly basis. As in the first two quarters of 2018, San Jose and San Francisco led the nation for seller returns, a respective 108.7 percent and 77.3 percent more than original price. Santa Rosa also ranks among the top five housing markets in the nation for returns, with sellers gaining an extra 67.9 percent from the time of purchase.