Want to Be a Good Neighbor? Avoid These Behaviors. 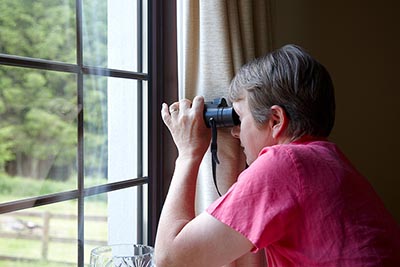 Anyone who hopes to be known as a good neighbor would do well to mind the old saying about good fences.

A recent survey from Porch asked Americans about their neighbors’ 10 most annoying habits. Using a 100-point scale, the company ranks neighborly behavior by annoyance level, with higher numbers indicating greater degrees of irritation.

The top complaint people have about their neighbors? That’s privacy intrusion, be it spying, making unannounced house calls, or being a busybody. Americans gave nosey neighbors a 75 on the annoyance scale, and 26 percent of those surveyed reported having a personal encounter with a snoop. Only 2 percent of Americans would admit having invaded their neighbors’ privacy themselves.

Noise is also major hassle, earning a score of 71. Almost half of respondents reported that their neighbors have played music too loudly or engaged in boisterous conversations, making it the most common peeve of the 10 included in the report. A near equal number have seen neighbors fail to clean up after their pets or park their cars in someone else’s spot, making these the third and fourth biggest neighborly annoyances, with respective scores of 67 and 66.

When it comes to resolving disputes, older Americans are more likely to confront their neighbors, with 33 percent reporting having engaged in a verbal or physical altercation. Confrontations with neighbors were cited by 28 percent of Gen Xers and 23 percent of millennials.

So what can one do to get in the good graces of the neighbors? Apartment Terapy has compiled a list of 36 tips, ranging from smiling and saying hello to offering to take care of their pets while they are away. And HGTV has published this good-neighbor guide, which addresses how to behave on neighborhood- or community-focused social-media pages.