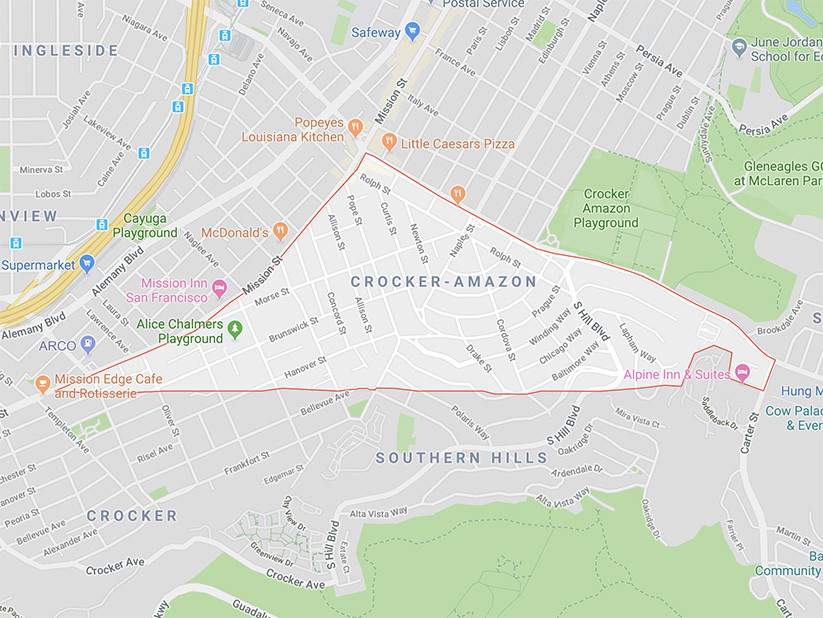 Crocker-Amazon Park borders the neighborhood to the north. It has four playgrounds and recently renovated soccer and baseball fields. Adjacent to the east of Crocker-Amazon park is McLaren Park, San Francisco's second largest park. It has a golf course, two lakes, jogging and hiking trails, a public pool, an old reservoir that is used as a dog swimming area, and the Jerry Garcia Amphitheater which has concerts and festivals.

The neighborhood benefits from some of the most varied weather in the city, with a balance of sun and fog. The top of the neighborhood boasts amazing views of downtown San Francisco in the gap between McLaren Park and Twin Peaks. Parts of the neighborhood, particularly heading toward Southern Hills, feature free-standing single-family homes with at least 10 feet on either side (in many San Francisco neighborhoods, there is a gap of no more than a few inches between homes). The diverse architecture of the homes throughout the neighborhood include Marina, Arts & Crafts, Victorian, Edwardian, and Mid-Century Modern styles.

The area is well-served by public transportation. MUNI Routes 8X, 8BX, and 54 serve the Geneva Avenue corridor and the 43 bus also serves Geneva Avenue, as well as Naples, Cordova, and Munich Streets. During rush hour, the Balboa Park Bart Station is only about a five-minute drive, an eight-minute bus ride, or a 15-minute walk. The neighborhood is convenient to nearby Interstate 280, and to the Alemany Boulevard thoroughfare. Crocker-Amazon is served by two elementary schools, Guadalupe and Longfellow.

Geneva Avenue and Mission Street, which bound the neighborhood, feature commercial businesses, including a barber shop, pizzerias, pharmacies, a hardware store and a vegetable market, as well as a growing number of restaurants and cafes.