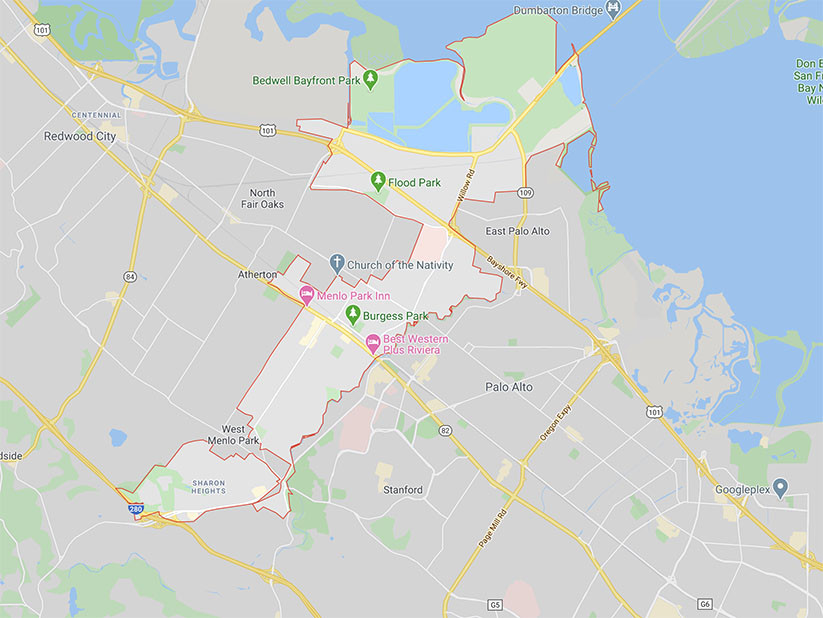 Menlo Park is a suburb of San Jose with a population of 33,869. Menlo Park is in San Mateo County and is one of the best places to live in California. Living in Menlo Park offers residents a dense suburban feel and most residents own their homes. In Menlo Park there are a lot of coffee shops and parks. Many families and young professionals live in Menlo Park and residents tend to lean liberal. The public schools in Menlo Park are highly rated.

Menlo Park, California is a city at the eastern edge of San Mateo County, in the San Francisco Bay Area of California, in the United States. It is bordered by San Francisco Bay on the north and east; East Palo Alto, Palo Alto, and Stanford to the south; Atherton, North Fair Oaks, and Redwood City to the west.

In the nineteenth century two Irish immigrants, Dennis J. Oliver and his brother-in-law D. C. McGlynn, purchased a 1,700-acre (6.9 km2) tract of land on the former Rancho de las Pulgas. In the 1850s they erected a gate with a wooden arch bearing the inscription "Menlo Park" at the entrance to their property (now the intersection of Middle Ave and El Camino Real). The word "Menlo" derived from the owners' former home of Menlo in County Galway, Ireland. In 1863, the San Francisco and San Jose Rail Road named a nearby station "Menlo Park" after the sign. The 1867 station building still stands on the platform of the current Caltrain station, used by the local Chamber of Commerce. The town of Menlo Park grew up around this station, becoming a popular home for San Francisco businessmen. A post office arrived in 1870, and the city was incorporated in 1874. The original arch which gave its name to the stations and ultimately the city survived until 1922, when it was destroyed in an automobile accident. The origin of the name of Menlo Park, California (ca 1850) pre-dates any work done by Thomas Edison (ca 1876) in Menlo Park, New Jersey.