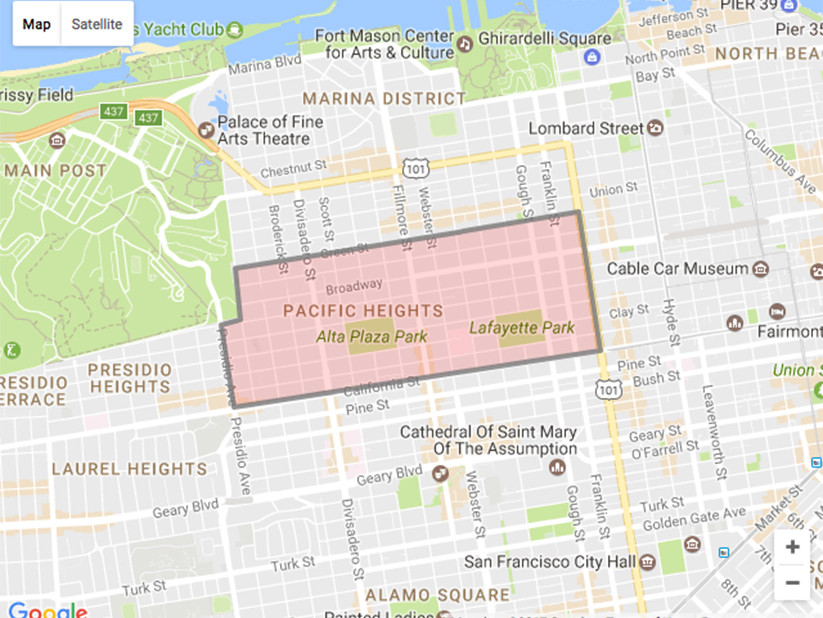 Homes in the grand, upscale Pacific Heights neighborhood deliver commanding views of the San Francisco Bay and the city below, with neighborhood hills rising from the Marina and running along an east-west ridge between the Presidio and Van Ness Avenue. When Hollywood wants to film a chase scene, Pacific Heights is where it comes for cinematic thrills.

Some of the oldest, grandest, and largest homes in the city can be found in highly affluent Pacific Heights, which features an ample stock of Victorians, Edwardians, Mission Revivals, and homes in the style of French chateaus. Some of the former baronial mansions now serve as elite private schools, including San Francisco University High School, Drew School, Town School For Boys, and Convent of the Sacred Heart (in the former Flood Mansion).

Pacific Heights has gorgeous parks, playgrounds, and, bounded by the Presidio, easy access to open space and miles of hiking, running, and biking trails. The main shopping district can be found on Fillmore Street, which runs north and south through Pacific Heights and is home to some of the city’s chicest boutiques and choicest restaurants.